Earlier this month, we lost a beautiful light in our community when Sarah Gregory Smith passed away. Sarah and her husband, Bill, moved to the Belfast Cohousing & Ecovillage a few years ago. Her connections with Flying Shoes included playing bass in the All Comers Band, dancing on 1st Fridays and at the Reentry Center, and hosting visiting callers & musicians. She was a powerful force for good in the world.  A Boston Globe article (here) describes some of Sarah’s many gifts and awe-inspiring accomplishments, and her obituary is below. 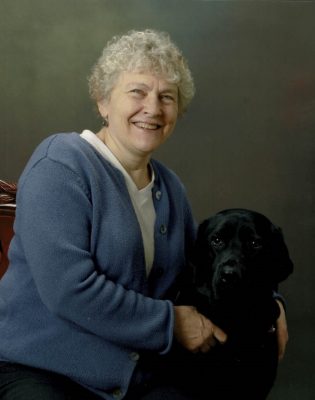 Sarah’s smile lit up a room.  She will be missed, but we are grateful for the joy she brought to our community.

Sarah Smith died on February 2, 2020, from a massive seizure.  It was the last of many challenges she faced in her life.  She became diabetic at the age of eight, lost her vision at the age of 30, survived the sinking of a boat, had a stroke at the age of 68 and finally, at the age of 71 she met the challenge that ended her life.

But these are not the events that defined her life.  In fact, as a friend recently wrote, “…Sarah’s life story was a series of triumphs”.

She played clarinet as a young person, enjoying several years of attending a music camp at Kinhaven Music School in Vermont.  Sarah loved it.  Later, she started playing traditional music, most for New England contra dancing.  She became a caller, continuing on long after she became totally blind.  Sarah could “read a room” like no other.

Sarah met her husband, Bill, through music and, together, they sang and played throughout southern New England.

Sarah was also a sailor.  She loved sailing her 33’ ketch with assistance from an audio compass.

Sarah relied on guide dogs to help her find her way in the world.  In fact, in 1994, to help publicize the school that trained and supplied her guide dogs (Guiding Eyes for the Blind), Sarah walked from Boston to New York!  It took her thirty days.

She grew up learning to identify birds by their songs and continued to love birding as a totally blind person.

In an article she wrote about her dogs, Sarah noted that she and Bill had no “human children”.  That’s how she felt and that is the straight-forward and somewhat ironic way that she liked to express herself.  As another friend said, “ …she lit up every room she entered.”

Sarah is survived by her husband, Bill, her brothers, Nick and Brooke, and her sister, Hannah, as well as many nieces, nephews, and friends.

Gatherings celebrating Sarah’s life are planned for both Maine and the Boston area.  In Maine, the gathering was held on Saturday, February 22.  People brought instruments, songs to sing, songs to lead, and stories to tell—to fulfill Sarah’s desire of how she would like to be remembered.  A Boston area gathering is being planned for the 24th or 25th of April.

A fund has been established in Sarah’s honor at the Kinhaven Music Camp.  Its purpose is to help provide young persons with the same kind of joyous musical experience that opened the world of music to her as a young person.  In lieu of flowers, please make a donation to help build this fund. Donations should be sent to Kinhaven Music School, 354 Lawrence Hill Road, Weston, VT 05161

Memories and condolences may be shared with the family at www.ripostafh.com.