Belfast Flying Shoes and the Makers Guild of Maine present an evening of Celtic music featuring Seán Heely & Beth Patterson, with special guest Owen Kennedy, at Mermaid Plaza, One East Main St (Rte1/Rte3) in Searsport on Thursday, May 19. A 6:30 pm workshop for musicians kicks off the event, followed by a 7:45 pm concert. Sliding scale admission for the workshop is $5-20 sliding scale, and the concert admission is $10-25 sliding scale.

The trio’s high-energy repertoire focuses on Scottish and Irish tunes and songs. Seán Heely is a young champion fiddler from the Washington DC area, but he’s known locally for his teaching chops, such as his past work with the Acadia Trad Festival and his online lessons. In fact, Seán is one of Owen’s mentors, and the two award-winning musicians have shared the stage before, including in October 2021 when they played for a large and enthusiastic audience at an outdoor concert in Searsport. On May 19, Seán and Owen will be joined by the bouzouki-playing Louisiana native, Beth Patterson, who has been described as “a cross between a cobra and a puppy”.

This concert at Mermaid Plaza will be a great way to emerge from a long winter and cold spring! Get ready to tap your toes and let your shoes and fiddle bows fly to the exciting rhythms of this powerful music. 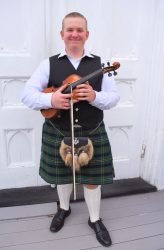 Read more about the performers in their bios, below:

Champion fiddler and singer Seán Heely is one of the most creatively versatile and captivating young artists of his generation. He is a U.S. National Scottish Fiddle Champion, an award-winning Irish fiddler, and a singer in the folk and Gaelic traditions of Scotland/Ireland. He holds a degree from the University of South Carolina in Classical Violin Performance and was a 2019 Artist-in-Residence at Strathmore Music Center in Maryland. An in-demand educator, he is on the adjunct faculty at American University and has been on the faculty of several music camps all around the U.S. Seán has performed with music icons such as Liz Carroll and Bonnie Rideout and continues to share his rich Celtic heritage with audiences around the globe. His debut solo album “Edge of the Bow” and duo record “Home Port” with Colin McGlynn as the Glencoe Lads have received critical acclaim.

Louisiana native Beth Patterson has played bouzouki (an Irish adaptation of a traditional Greek instrument professionally for thirty years. She has been featured in various lineups, ranging from traditional Celtic to myriad genres that typically don’t include the bouzouki, such as Cajun, blues, and metal. She began touring as a founding member of The Poor Clares before setting out on a solo career as a singer-songwriter. Beth studied traditional music and ethnomusicology with Micheál Ó Súilleabháin and Mel Mercier at University College Cork, Ireland, and hold a Bachelor’s degree in Music Therapy from Loyola University, New Orleans. She has performed in twenty countries and appeared on over two hundred recordings, including eight solo albums of her own. Seán and Beth met during one of her gigs in Norfolk, VA in 2020 and since then they have been creating new music together as well as breathing new life into their vast Celtic music repertoire.

Owen Kennedy is a teen-aged fiddler from Maine whose love of traditional music and enthusiasm for performing has captivated audiences from San Diego to the Shetland Islands and all over New England. He enjoys tunes from traditions beyond Maine, especially Scotland & Shetland, Cape Breton, Quebec & the Maritimes, and appreciates the challenge of playing true to the authentic style of a place and culture. Owen recorded his debut album Oh When: Now with Owen Marshall in February 2022. People have been asking for a while: “Owen, oh when will you have a cd we can buy?” Owen will soon be able to answer that question at upcoming performances! As an emerging musician rooted in the Maine Maritime music tradition and exploring the music of Scotland, the album includes the tunes he’s loved for years, as well as newer favorites from Shetland and Scotland. Owen made the best of the Covid challenges with various video projects including the ongoing 50 Fiddlers from 50 States Project and sharing music online.